Quaya is one of the central regions of the continent.  I have a pair of old posts HERE and HERE about the warm hills of Quaya, but those are Pre-Mage War™ and not exactly... "current"

For starters I'll list a few TLDR points of the region before the war ravaged through the area. And then go into detail about the changes to the region and list a few of the well known Points of Interest.

The spark which ignited the mage war began in Trystero. A meteor of unknown magical origin crashed into the tower of the Lenguamancers in Trystero. In it's wake well over half of the city was reduced to a crater. The survivors clung to life in the rubble of their once grand city. Even now the city is mostly slums and shanty towns. The regional offices of the Black Guard are located at the edge of the crater, which they use as a poignant backdrop for their various anti-mage speeches and recruitment drives. The once well maintained and treasured orchards of Trystero are now a monkeyrat infested thicket of fruit trees. Being a fruit harvester is a high risk but well payed job these days.

When the war came the Dwarven Common Grace were caught unprepared. Their militias armed with little more than repurposed farming implements and leathers. Their fields burned around them as they fled before mage fire and sword. Few lived to become refugees, fewer still survived holed up in their hillside dwellings. Rumors swirl that some of these hold outs resorted to cannibalism, (an addictive practice which leads to madness and eventually renders one into a ghoul as the weight of their sins slowly chews away at the soul) 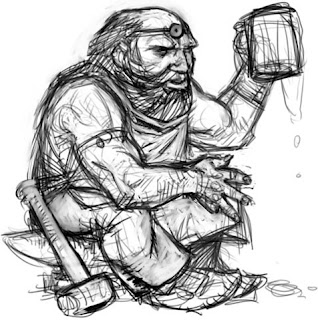 Millstone, the largest town of the Common Grace was destroyed. It's great millstone lies cracked in half where the mill was burned down around it. The dwarves hills were ravaged by magic during the war, earth churned into unnatural formations, blights and the lingering effects of dark magic leeching the soil etc.

Much of the region has been reclaimed by the Church of the Plow but many are still deemed too dangerous to venture near. Thanorek is one such place. Though most goblin encampments are While most goblin hordes move from place to place the Thanorek encampment, is more permanent having been built around The Brazier; a fire pit made of rune-etched iron in which an efreeti was bound by magic. During the war it was freed (no one is sure how or why) and burned the entire encampment to the ground in a gleeful massacre of revenge. Now it slumbers in the ruins of Thanorek, surrounded by soot spirits and minor fire elementals. Few who wander close live to tell of it, but those who do have reported that the soot spirits appear to be building...

Salendar has remained relatively untouched. The Diviners college relocated to the city shortly after the war began and though the war raged on outside of the cliff side city none bothered to besiege or destroy it. Now it stands as a bastion of old magic in a dark world. Salendar is the only major city in the region to refuse any entrance to the Black Guards and has become a sanctuary for refugees of various stripes.